Memories of Underdevelopment (1968, Tomás Gutiérrez Alea) Cuban political existential montage-ish film, reminiscent of French New Wave et al, clever mix of fiction/documentary/news from the time, dealing with issues of national identity, class etc. with some clever-clever touches of humour.  I enjoyed this, full of passion and existential mulling which I like – but I think as raw feeling goes, I preferred Black God White Devil (see below).

I Am Number Four (2011, D.J. Caruso)  Cinema. Surprisingly enjoyable sci-fi teen superhero bobbins – like Buffy crossed with Smallville (if there were more than one Superman, each with a ‘Watcher’).  Very much feels like Smallville (unsurprisinlgy, coming from its creators), but with better SFX and a fast-paced plot not entirely dissimilar to the likes of recent-ish Percy Jackson film. Black God White Devil (1964, Glauber Rocha) This Brazilian film is about so much (religion, politics, suffering, national identity….) I’m not going to attempt to summarise – but brims over wonderfully with raw passion and anger, I surprise myself by still mulling it over a long time after watching.  I have a lot of admiration for this film, very stirring stuff. 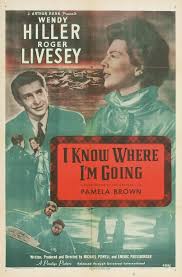 I Know Where I’m Going (1945, Powell & Pressburger) Rewatch on TV.  Och!  A wonderful film, this is how to make a romantic film, people.  Plus, Roger Livesey’s voice, it doesn’t get much better.

Xala (1974, Ousmane Sembene)  Seminal African cinema, not really my cup of tea and didn’t find it especially amusing, although meant to be a comedy, but then I am clearly not the target audience.  Upon doing lots of reading about it, it is very interesting to ruminate upon (with regard to African storytelling traditions especially), but the end scene – and my re-enactment of it for Mr Tassles, causes me to laugh for all the wrong reasons.

Yeelen (1987, Soulemane Cisse) More classic African cinema – much more stunning visually than Xala; a very different film, based upon ancient legend about a young man with magical powers journeying to confront his sorcerer father.  Interesting pacing and beautiful scenery, good film but not really my cuppa.

Jour de Fete (1949, Jacques Tati) Rewatch (again!) on DVD.  Beginning of my mini Tati-fest at home, now I have about 5 of his films.  GLorious comedy about a fair setting up in small town France.  I chortled out loud once again.  Tati has a special place in my heart. 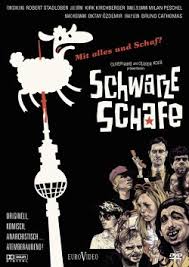 Black Sheep/Schwarze Schafe (2006, Oliver Rihs) Urban lifestyle hipster/losers in Berlin – very funny, will be shocking to some (to fainter-hearted than I, at least) – especially scenes such as man chopping off his hand for love, Satanists using a comatose granny in black magic ritual (definitely NOT a scene for the easily offended) and young chavs, after accidental ketamine trip comparing erections.  Very funny, and actually quite delicately handled and touching in places, more thoughtful than the things mentioned make it sound, with some very extreme/graphic images to boot!

Drawing robots under pressure from a toddler, around 9am this morning…

Aaaaand I've finished making a dress inspired by a 1970 kids book, using a 1971 dress pattern and a bit of leftover duvet cover from a charity shop! #hauntedgeneration #1970swyrd #generationhexed
Halloween 2019 part 2 #folklorethursday
Halloween 2019 #folklorethursday
Joined a video shop. Again.
You go 30 years without any tapes then two come along at once... A two tape joy kinda day, thanks to GTFOD!